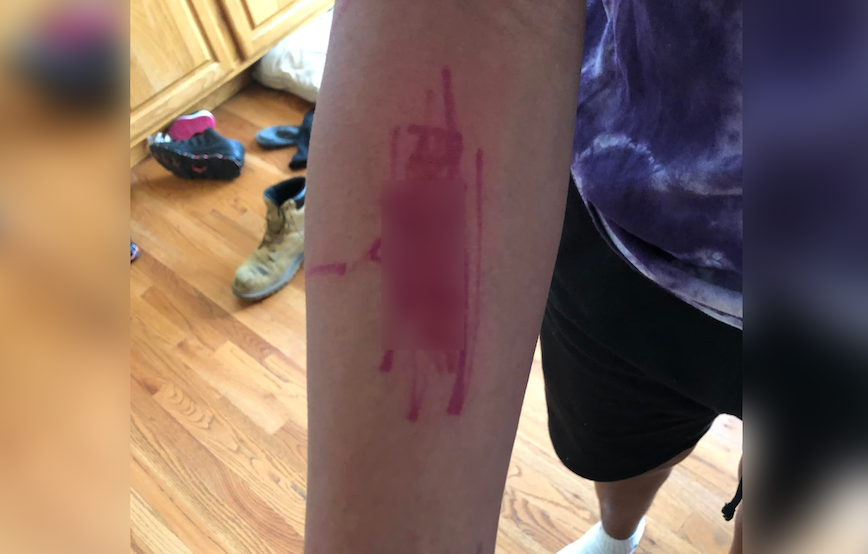 Parents claim the school’s principal and assistant principal refused to investigate and discipline the white classmates for writing the N-word on their son’s paper and on his arm. The couple said their son came home from school with a racial slur written on his arm. But, the school officials reportedly told the parents that they did a handwriting analysis to determine who had written the slur and based on a loop in an “e” they believed their son was responsible. Few days later, another student wrote the N-word on the boy’s arm.

During an interview with WTOL 11, the parents from Ohio, Rance and Nadolyn Reed, reportedly said the incident began last week when they received a phone call from their son’s school, Timberstone Junior High School. The school administrators reportedly told the parents that their child, Nolan, had written racial slurs on his paper.

But, the confused parents couldn’t understand why the boy would write racial slurs on his paper.

Nadolyn Reed reportedly told WTOL 11: “I didn’t understand why they would think that Nolan would write the ‘N-word’ on his paper or that he hates ‘N-word’s and that ‘N-word’s can do s–ual acts on him.

According to the parents, the school officials told them that they reportedly did a handwriting analysis to determine who had written the slur and based on a loop in an “e” they believed Nolan was responsible.

Few days later, another student, who was not identified, reportedly wrote the N-word on Nolan’s arm. The boy came home and told his parents.

During an interview with WTOL 11, Nolan Reed reportedly said: “I was feeling hurt because I thought she was my friend and I was confused on why she would write that on my arm.”

Per reports, the school district released the following statement:

“The school and district were made aware of the situation and immediately began an investigation. We take matters of this nature seriously. Inappropriate and derogatory behavior is not tolerated.”

Our family has spoken to Principal Clarkson, and the assistant principal David Malolepszy about the discrimination since school started. Our son’s 6th grade teacher, Timberstone’s assistant principal and principal stated our son is in the wrong for the N-word on his paper.

We have been asked to no longer come to the school to advocate for our son by Principal Clarkson at Timberstone and Assistant Superintendent. If anyone can help us with a solution please help. Please share this post so that a change can occur and our son can be treated equally and so that the school can know this is not acceptable and as a community we will not tolerate this hatred.”