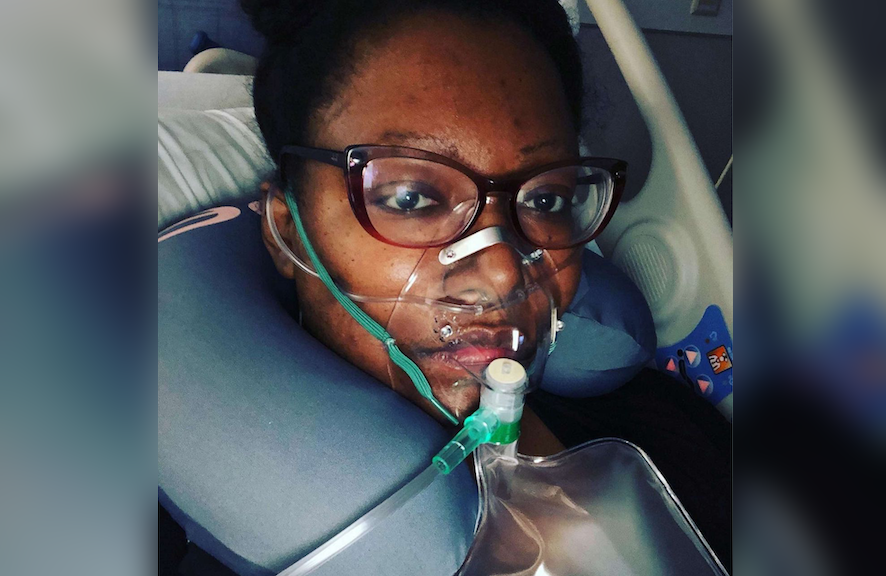 The 37-year-old woman claims she now manages diabetes and high blood pressure, two health conditions she didn’t have before contracting COVID-19. The woman, who is still recovering from the impact the Coronavirus had on her body, says doctors told her that her lungs were failing just two days after being admitted to the hospital. The young woman tested positive for COVID and was put into a medically-induced coma. She remained on the ventilator for 31 days. Now, more than two years after testing positive for the virus, she is still managing the physical and mental toll, she said.

During an interview with Good Morning America, the 37-year-old woman from Michigan, Heather-Elizabeth Brown, says she is thankful and grateful for her life after surviving COVID-19. In 2020, the corporate training consultant was put into a medically-induced coma and placed on a ventilator for 31 days. An X-ray reportedly revealed that the 37-year-old woman had COVID-induced pneumonia in both lungs and she was put on the highest level of oxygen. Just two days of being admitted, the medical personnel told her that her lungs were failing.

According to ABC News, in April 2020, the 37-year-old woman said that she started having trouble breathing and was so tired. Heather-Elizabeth said that she was barely able to perform basic functions to take care of myself. Her symptoms worsened and she decided to go to the hospital. Unfortunately, an X-ray scan revealed that the woman had COVID-induced pneumonia in both lungs. Heather-Elizabeth tested positive for COVID and was put on the highest level of oxygen, GMA reports.

After spending 2 days in the hospital, her lungs were collapsing, she said. Unfortunately, the 37-year-old woman was then put into a medically-induced coma and placed on a ventilator. She reportedly spent 1 month on the ventilator.

Heather-Elizabeth Brown reportedly told Good Morning America: “It was an experience that I don’t think I can explain adequately. I had a lot of vivid dreams and nightmares. The whole left side of my body was so weak, I couldn’t even hit the call button for the nurses. I was able to FaceTime with my mother but no one was able to visit me in the hospital.”

Heather-Elizabeth never thought that she would have to re-learn something so basic as walking. The 37-year-old woman went to rehabilitation for about 2 months and has gone through months of physical therapy, pulmonary therapy and occupational therapy.

The young woman still walks with a limp, she said. She also underwent physical therapy to recover from her extended stay in the intensive care unit for COVID-19. According to ABC News, Brown claims that she now manages diabetes and high blood pressure, two health conditions she didn’t have before contracting COVID-19. She was on a lot of insulin for quite some time, she said.

The corporate training consultant also told GMA that she had problems with nerve pain and brain fog. Brown also claims she has post-traumatic stress disorder from her ICU experience.

She also said doctors reportedly told her she may have suffered a mini-stroke, the result of blood clots that COVID patients continue to face.

The brave woman is now spending a lot of her time to long-hauler advocacy and being a voice for the community. Right now, Brown is reportedly involved with several support and advocacy groups for COVID-19 survivors.

“I am a fierce advocate for the COVID-19 long hauler community and for people who have survived this, and for families who are dealing with it in any capacity. I take seriously the position I’ve been given to be able to just encourage people and to let people know that even though it can be difficult and even though it can be scary it’s definitely something that people can overcome. We’re keeping our feet on the gas when it comes to research and when it comes to education and when it comes to really being vocal proponents for people who have been affected by COVID.”