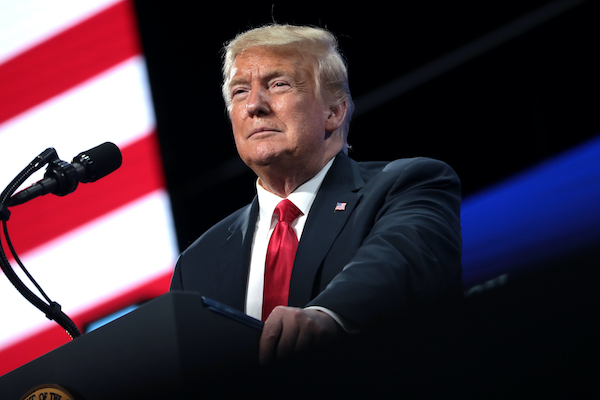 In an explosive new statement, former President Donald Trump released a message teasing his return to politics. The statement came in response to a Daily Beast article claiming he wanted the Justice Department to go after Saturday Night Live.

Towards the end of his statement, Trump teased his supporters by saying he had received the most votes of any sitting president in the “very fraudulent election. 2024 of before!”

“The story that I asked the Department of Justice to go after ratings-challenged (without Trump!) Saturday Night Live, and other late-night Losers, is total Fake News,” Trump said the statement which was released on Tuesday evening.

“It was fabricated, there were no sources, and yet the Lamestream Media goes with it,” he added. “I did say, however, that Alec Baldwin has no talent, certainly when it comes to imitating me. The one who had what it took was Darrell Hammond.”

“With all of that being said, however, I do believe that the 100% one-sided shows should be considered an illegal campaign contribution from the Democrat Party, hard to believe I got 75 million votes (the most of any sitting President) despite all of that, together with a very Fraudulent Election. 2024 or before!” he concluded.

Former President Trump is slowing making his way back into politics. According to Newsmax host Rob Schmitt who spent Saturday with Trump at his golf course in Westchester, New York, the former president is getting read to wage political war against Republican Senator Mitch McConnell.

Schmitt, who had lunch with Trump over the weekend, explained that the former president will be going after McConnell in the midterms.

“He talks just like a regular guy,” Schmitt said on Newsmax. “Loves to tell dirty jokes and cuss and do all the things guys do. He’s warm and personable, very engaging. Not a politician, that’s his best quality. And he says he’s going after Mitch McConnell. And anybody who supports him, he’s thinking about not supporting them!”