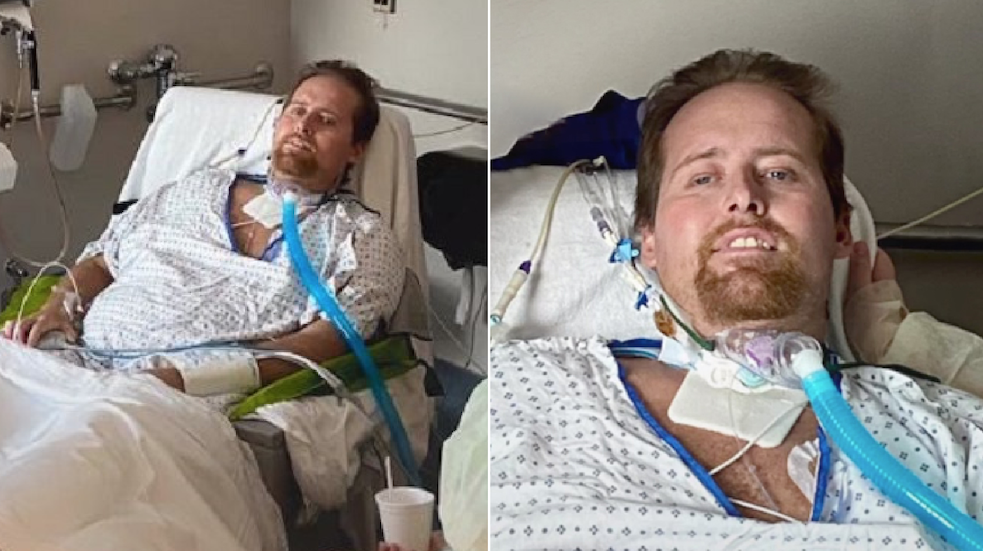 Before their illness, the 34-year-old man and his wife declined the COVID-19 vaccine. His wife reportedly said that she and her husband wanted more information before deciding to be vaccinated. The 34-year-old father reportedly spent 47 days on ECMO, under sedation, and was given 6% chance of surviving after contracting COVID-19. The ECMO machine, according to doctors, is the last hope for COVID patients. Now, the man says he is still sore as his muscles regenerate, and has nerve damage in his hands and feet.

The 34-year-old father, Daniel Perry, was reportedly hospitalized on July 27, 2021 after he contracted COVID-19. He ended up in the ICU at Novant Health. Just 10 days later, he was placed on an ECMO machine, which, according to doctors, is the last hope for patients.

His 32-year-old wife, Mindy Perry, developed a fever on July 25, Novant Health reports. Mindy tested positive for COVID-19 the following day and planned to quarantine at home. Unfortunately, just one week later, the 32-year-old pregnant woman began to have trouble breathing and was rushed by ambulance to the hospital. She was eight months pregnant at the time. Mindy reportedly gave birth to her son Tucker on Aug. 2. The newborn was admitted to the neonatal ICU. Doctors told the mother that they boy tested negative for COVID-19 and four days later, the newborn baby went home.

On July 17, 2021, the family enjoyed a day on their boat. Unfortunately, the following day, Daniel woke up at 4 a.m. with a slight fever. One week later, he was admitted to the ER and diagnosed with pneumonia due to COVID. He was sent home to quarantine in a back bedroom. But, few days later, he was unable to breathe and was rushed by ambulance to a hospital. Daniel reportedly spent more than 4 months at the hospital.

According to Novant Health, Daniel was initially placed on a ventilator, also known as life support, to move air in and out of his lungs. According to Daniel, this treatment lasted 2 months. But, unfortunately, it wasn’t enough. The doctors then turned to ECMO, which stands for extracorporeal membrane oxygenation. According to the health officials, this machine reportedly pumps blood outside the body to a heart-lung machine that removes carbon dioxide and sends oxygen-filled blood back to the body. Daniel spent 47 days on ECMO, under sedation.

One day, the doctors told the family that Daniel only has a 6% chance of surviving. One of the nurses at Novant Health, Hyla Smith, reportedly said that she was there when Daniel nearly died. Hyla Smith reportedly said: “I can’t tell you how many times this sweet man coded (suffered cardiac or respiratory arrest), and we brought him back.”

After the ECMO and the ventilator, Daniel was then moved to inpatient rehab. Daniel spent 93 days there. On Nov. 30 – 127 days after being admitted to the hospital, he was finally discharged from the hospital. Mindy said that the homecoming included a wheelchair, walker, oxygen, and physical and occupational therapy that ended earlier this year.

Daniel told Novant Health that he has returned to work as a bridge maintenance engineer with the N.C. Department of Transportation. The 34-year-old dad also added that he’s 80% back to full strength. He is still sore as his muscles regenerate, and he has nerve damage in his hands and feet.

Since their COVID-19 journey, both Daniel and Mindy have been vaccinated against COVID-19. Before their illness, they had declined. Mindy reportedly said that she and her husband wanted more information before deciding to be vaccinated.

Now, the lucky family is getting ready for Father’s Day. Both parents look forward to spending their first Father’s Day on June 19 with Tucker. At the same time, they look back with gratitude to those who they believe made this day possible – God and the medical personnel.