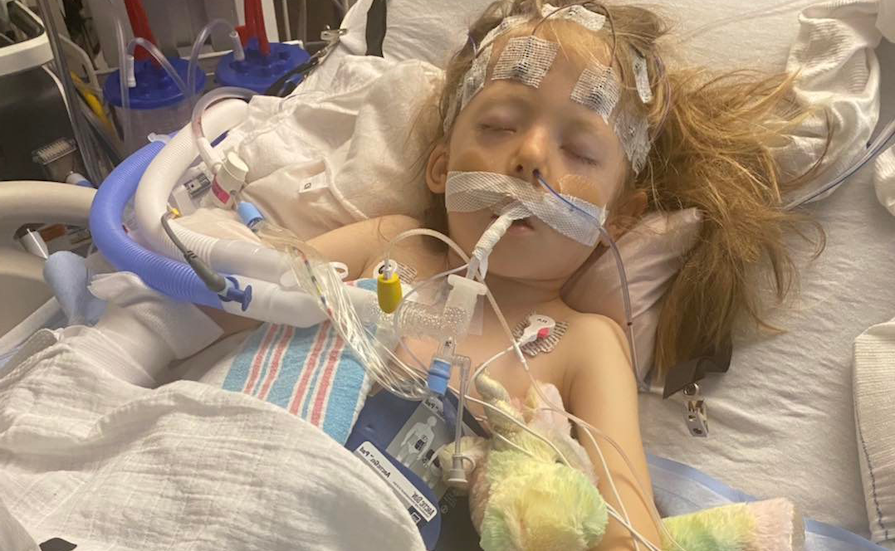 The mother said that her young daughter underwent a routine medical procedure and while in recovery her lungs began to fill with fluid and she went into cardiac arrest. The little girl then went into cardiac arrest and the medical personnel quickly began chest compressions. Unfortunately that caused her to hemorrhage. After several minutes of chest compressions, doctors intubated the little girl. “She is on the ventilator which is breathing for her. They are running an EEG now to check for seizure activity. They will do a CT scan today to see if there is damage to her brain. They will repeat x-rays throughout the day to see if her lungs are keeping the fluid out.” the mother wrote on her Facebook page.

“Every time I say to myself I can’t take one more thing…. One more thing happens. Honestly at this point I don’t even know how we are functioning. The exhaustion is beyond belief, the heartache is too cruel to even talk about.” the girl’s mother, Meagan, reportedly said. She says that her daughter Charley was born with 22q syndrome which can affect any system in the body and lead to a wide and varying range of health issues.

On a Facebook page she dedicated to the recovery of her twins, Lainey and Levi, who nearly drowned in 2020. Meagan said that her daughter Charley was recovering from a procedure when she suffered a laryngeal spasm causing her to be unable to breathe.

She went into cardiac arrest and the medical personnel quickly began chest compressions. Unfortunately that caused her to hemorrhage. After several minutes of chest compressions they intubated the little girl. Meagan couldn’t help but compare the frightening experience to when her twins nearly drowned in a friend’s pool. Lainey was able to make a full recovery, but Levi sustained significant brain injury. And more than a year after the incident Levi still continues to recover, according to WTHR.

While questioning why her family was being put through another test, Charley underwent medical tests to see if any damage was done. And finally some good news. Although Thursday night Charley suffered what doctors initially thought was a seizure, it turned out she was simply trying to wake up from sedation.

Her chest x-ray on Friday morning looked “great,” and doctors were able to lower the setting on her ventilator with the hope of extubating her on Saturday. Meagan wrote they also hope to start introducing food to Charley. After experiencing a rollercoaster of emotions, Meagan has remained cautious about appearing too optimistic.

Meagan shared her unfortunate experience on her Facebook profile.

“I honestly don’t have words. I’m numb, heartbroken, angry, confused, and completely empty. I’m trying to process everything and I’m hoping I have the information correct to update. What was supposed to be a routine procedure has ended in me reliving the worst day of my life. Charley was on the recovery floor after her procedure and as she was waking had a laryngeal spasm – which prevented her from being able to breathe. Her lungs filled with fluid which is called pulmonary edema. She went into cardiac arrest and they started chest compressions which caused her to hemorrhage. After 6-7 minutes of compressions they intubated. Charley’s oxygen still dropped many times and she had to be bagged to get her breathing again.

The hospital staff has been amazing and their quick actions are so appreciated. It’s like I’m reliving the twins drowning- they are doing all the same things to Charley as they had to do with the twins. They are cooling her body to keep her temperature down. She is intubated on a ventilator with high flow to keep the fluid from gathering in her lungs. They have had to bronch her twice to suction and try to stop the bleeding from her lungs. They will do an eeg to check her brain activity. They just did an echo and luckily her heart is functioning okay.

I can’t believe this is happening – my sweet beautiful girls who was making pizzas for the doctors before her surgery and giggling with me is now on full support making sure she makes it through the night and recovers. I wasn’t expecting this at all. I promised her we would be home tonight. She was so excited to go to the hospital today – she couldn’t wait to see the nice doctors who would help make her feel better. Little did I know they would not just be doing a routine procedure but saving her life tonight. Thank you to all the staff here.” the mom reportedly wrote.

Few hours ago, the mother posted an update, saying the ICU team has decided to move forward with extubate and told the mother that her daughter’s lungs no longer look sick. But, the mother thinks the desaturation episodes are from her getting angry she is still intubated.

Gov. Lee will sign an executive order directing accountability measures for school safety and an evaluation of training for Tennessee law enforcement