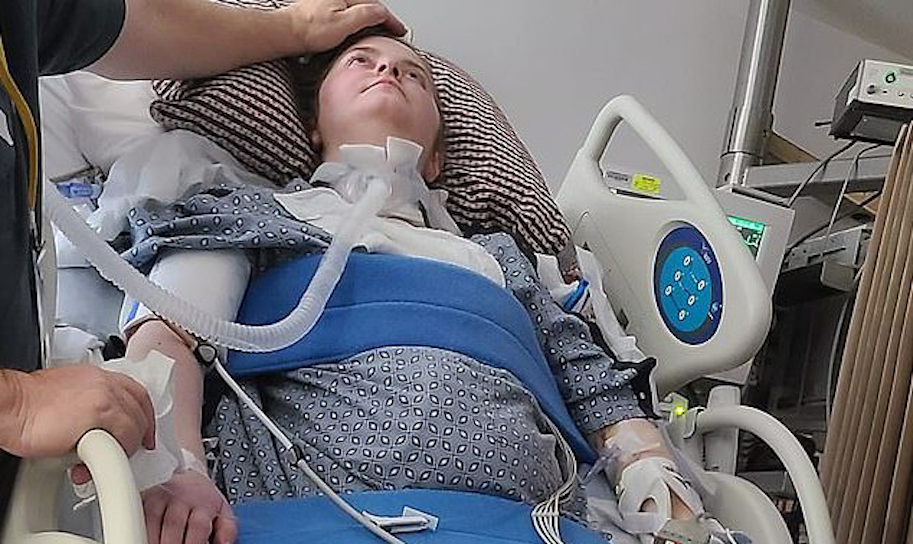 The 19-year-old woman reportedly suffered four strokes and had to undergo five surgeries. She also needed breathing and feeding tubes after having a severe reaction to the Johnson & Johnson COVID-19 vaccine. Her family says she is learning to walk again. Health officials said that her reaction to the vaccine is rare. For those who received a J&J vaccine, the CDC recommends getting a booster shot from Pfizer or Moderna.

On Friday, the 19-year-old woman from Nevada, Emma Burkey, was able to walk down stairs a year after being told she’d never be able to.

In April, 2021, the 19-year-old woman was rushed to a hospital after she suffered a seizure following the one-dose of the COVID-19 vaccine. Per reports, Burkey believes the Johnson & Johnson COVID-19 vaccine caused the onset of a rare medical condition, which led to three brain surgeries, two additional surgeries, four strokes, and the need for a breathing and feeding tube.

The good news is that the 19-year-old woman no longer needs help from machines for breathing or eating. But, the bad news is that her strokes left her with limited movement. She said that she already has regained upper body strength and managed to hold a baby doll.

In the last 10 months, the 19-year-old woman is undergoing physical therapy (5 hours every day) to relearn fine motor skills and how to walk again. Burkey was also placed in a medically induced coma and said she could not move, speak, or blink her eyes when she awoke, according to reports.

Health officials said that her reaction to the vaccine is rare. For those who received a Johnson & Johnson vaccine, the CDC recommends getting a booster shot from Pfizer or Moderna.

The 19-year-old woman said that when she suffered a seizure, her parents rushed her to the hospital. The medical personnel reportedly found a blood clot in her brain and said she had low platelet levels. She was diagnosed with thrombosis with thrombocytopenia syndrome, which at the time was only linked to the AstraZeneca vaccine.

According to the health officials, this condition has affected only 57 patients out of the 18 million who have received the J&J vaccine.

Emma Burkey reportedly said: “At the very beginning, when I was at the hospital, I couldn’t move literally anything. And my parents didn’t know that I was even there, that I wasn’t a vegetable, until I stuck my tongue out.”

The 19-year-old woman also said that she can now walk up four to six steps by herself. She also uses a cane or a walker, and a leg brace, and can walk about 300 steps in durations of 10 steps at a time.

Unfortunately, she has only limited movement in her hands, with her right hand having 10 to 15 per cent of the normal range and her left at one to two per cent.

A GoFundMe Page has been created to help the 19-year-old woman with her medical expenses. The fundraiser has since raised $72,197 out of its $100,000 goal.