Woman gives birth in her car’s front seat after husband thought it was false labor: “My wife, she’s a rockstar” 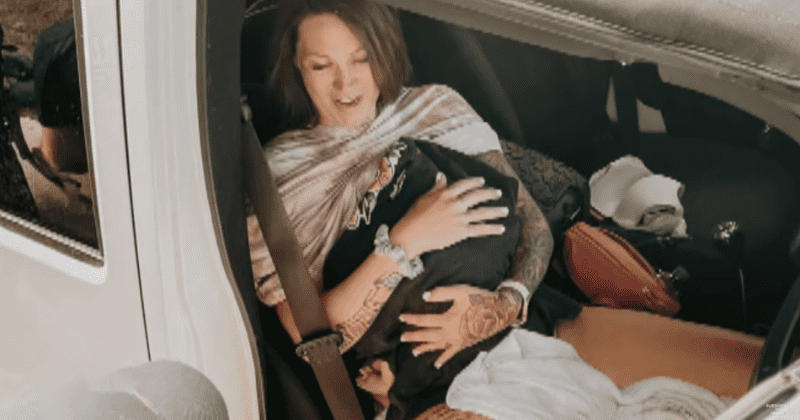 This UPS driver has made all sorts of deliveries in his life. But the one that stands out the most is the delivery of his baby boy who came into this world on the side of Interstate 440. Ryan and his wife were on their way to the hospital when she was having contractions right in the front seat of their Jeep Wrangler.

“Halfway to the hospital I couldn’t scream anymore and I knew this was getting real,” Galya said.

She went completely silent as the contractions intensified. “That was the sign that told me baby is on the way, and we won’t make it! Gave Ryan the option to get the hell there and speed up, or call 911. Which he refused to do because he was still convinced it was false labor,” Gayla wrote on Facebook.

Gayla recalled “…I told him, now is the time to go fast and get in the median and I don’t care if a cop, tries to pull us over, let him escort us. And I said we’re called 911 but he didn’t want to because he didn’t want them to waste their time and meet us at the hospital, you know, because it was gonna take probably 10, 15 minutes. So it’s all of a sudden I said, if you’re not going to choose those options you’re gonna have a road baby.”

It barely took a few minutes for Ryan to realize he was quite wrong about it being a “false labor.”

“I looked down and little man was crowning,” Ryan said.

He immediately pulled over to the side of the road and took charge of the situation with help from a 911 operator on the line.

“The umbilical cord was wrapped around his neck for 2 to 3 minutes. He was blue,” Ryan recalled.

One more push later, Ryan managed to grab the little one’s shoulders and pull the baby out.

“He wasn’t responsive so I cleaned out his mouth and immediately put him skin-to-skin with momma,” Ryan said. “She started rubbing and patting his feet and he finally let out a cry. It’s the sweetest sound you can hear.”

As cars whizzed past them on the highway, Ryan and Gayla witnessed the first moments of their son, Baby Carson, born weighing 7lbs. 3 ounces and 20 1/2 inches long.

“It was scary but absolutely amazing at the same time,” Ryan said about his son’s birth.

Minutes after the 8:56 am delivery on June 16, paramedics arrived and rushed the mother and newborn baby to the hospital.

“My wife, she’s a rock star and was able to deal with the contractions and get him out,” the husband and father said.

Speaking about whether he would do it all again, Ryan said, “I mean, for us, this is, this is about the best way I think as long as you know, Gayla is happy and healthy and Carson is too, I’d do it again in a heartbeat you know I just… instincts took over and it was, it was, it was fantastic.”