Endangered Sea Turtles Make Stop In Chattanooga Over The Holidays 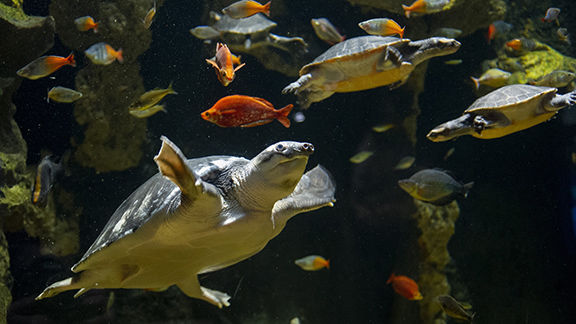 CHATTANOOGA, tENN – Endangered sea turtles rescued from the beaches of Cape Cod, MA, are now in the care of Audubon Nature Institute’s Coastal Wildlife Network in New Orleans, LA, after a long but successful journey over the Thanksgiving holiday that required collaboration among several organizations.

For weeks, rescue and rehabilitation efforts have been underway as hundreds of cold-stunned sea turtles wash up on the beaches of Cape Cod, MA, suffering from life-threatening medical conditions that are a result of weeks of hypothermia and the inability to feed brought on by plunging ocean water temperatures.

Staff and volunteers with Massachusetts Audubon Wellfleet Bay Wildlife Sanctuary rescue the turtles and take them to the New England Aquarium’s sea turtle hospital and to National Marine Life Center, where they are stabilized before being flown to secondary rehabilitation facilities along the East Coast and Gulf of Mexico to continue treatment.

On Wednesday, pilots with Turtles Fly Too were transporting 30 Kemp’s ridley turtles to CWN’s Aquatic Center in New Orleans when they encountered strong headwinds and storms. The severe weather slowed the trip, forcing them twice to refuel and change course to avoid winds.

When the pilots tried to take off after a second refueling in Chattanooga, a rock kicked up and damaged the plane’s propeller, requiring repairs that prevented it from flying. Staff from Turtles Fly Too, NOAA Fisheries, and the New England Aquarium began contacting colleagues to find emergency housing for the turtles overnight.

The president and CEO of the Tennessee Aquarium mobilized his staff to drive to the airport, pick up the turtles, and bring them to their offsite facility.

“It’s easy to fall in love with sea turtles and appreciate the dedicated professionals who work tirelessly to save these endangered animals,” said Keith Sanford, the Tennessee Aquarium’s president and CEO. “Our team was happy to provide assistance to this important rescue and rehabilitation project.”

Veterinarians from the Tennessee Aquarium and New England Aquarium worked together to provide care for the turtles, sharing animal records and performing health exams. While the turtles were kept overnight in Chattanooga, the organizations worked around the clock to create a plan to transport the turtles to their original destination.

“I have always said truly special people work in the business of animal conservation; this has proven to be true so many times in my 30 years doing this work,” said Connie Merigo, marine animal rescue department manager at the New England Aquarium. “When we learned the plane could not reach its final destination, a flurry of calls went out, and within an hour, we had safe, warm overnight housing secured for these turtles. The zoo, aquarium, and sea turtle rehab network rallied around us in record speed.”

“We are grateful to our partners who stepped in so quickly to help these turtles, especially since it was late on the night before Thanksgiving. But everyone jumped in enthusiastically to find a place for these turtles,” said Kate Sampson, NOAA Fisheries sea turtle stranding and disentanglement coordinator for the Greater Atlantic Region. “Kemp’s ridleys are endangered, so every single one makes a difference to the survival of the species.”

On Thanksgiving afternoon, Tennessee Aquarium staff helped load the turtles into a passenger shuttle loaned by the Chattanooga Airport, and Turtles Fly Too pilots hit the road. Staff from CWN met the pilots halfway, then continued transporting the turtles to New Orleans.

“Turtles Fly Too does whatever it takes to make the mission happen. When challenges arise, we turn on a dime and make adjustments,” said Leslie Weinstein, president of Turtles Fly Too. “Thank you to our turtle fliers Robert and Jessica Tingley for going above and beyond when we needed them to travel by land instead of sky to ensure a successful transport. We love working with all of these partner organizations to save this endangered species.”

Coconut Oil on Keto Diet: Is It Good or Bad for You?

The Chattanooga Police Department is recognizing its own, men and women who put their lives on the line to protect the city