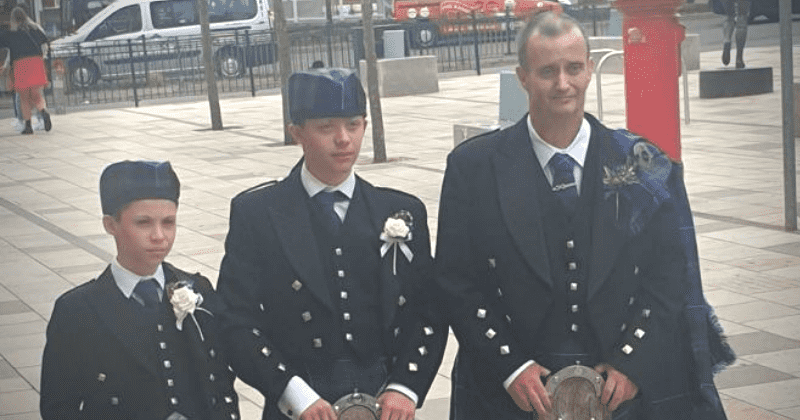 A father-of-11 passed away on the day of his wedding just as his wife was walking towards him down the aisle. Sitting in a chair at the end of the aisle, the 57-year-old man was waiting at the altar for his partner of 21 years. But when she finally walked down the aisle with their son and reached the altar, she found her partner unresponsive. As the devastated bride revealed what happened, she said she planned the wedding on short notice so they could fulfill their last wish in the little time he had left.

Only 8 days before his death, Paul was told by doctors that he had pancreatic cancer.

On the big day, June 25, Alison wound up forgetting her flowers and waited for a friend to bring it to the venue. “By the time I had gotten my flowers and went up the stairs. Everything seemed to be okay although Paul seemed to be a bit uncomfortable by this point and his kilt had been loosened a wee bit to help him feel more comfortable,” Alison shared.

“He had actually been wheeled up in an office chair into the lift and taken up the stairs as he had no energy to get up to the room. He was out of breath and struggling from what I was told.”

Finally, in front of 20 guests at the venue, Alison began walking down the aisle with their oldest child, 20-year-old Sandy, beside her. But Alison immediately grew worried from the moment she saw her groom sitting slouched in the chair.

“By the time I got to him I called his name a couple of times,” Alison said. “He didn’t turn round, he didn’t look at me and I realised there was something wrong and I started breaking down and I started shouting his name and we knew something wasn’t right.”

Soon, Paul was administered CPR but he did not make it.

“It was hard,” the grieving bride said. “It’s taken me a wee while to get to where I am now and every day just seems to merge into one. It feels like only yesterday that it happened. I’m having to get up and moving every day for the sake of my children but I can’t eat.”

Together, the couple has five children, and Alison described Paul as a “fantastic dad.”

After discovering that he only had six weeks to two months to live, his family pushed forward the couple’s wedding from July 16 to June 25. But the day his loved ones gathered to watch Paul tie the knot became the day the loving family man passed away.

“If I had known we didn’t have long I would’ve tried to arrange the wedding for the beginning of the week,” Alison shared. “He never actually got any treatment.”

Alison spoke about how much Paul loved his family and said, “We were his life, he would do anything for his kids. He would move heaven and earth for his kids and everyone loved him. He would give you every last penny he had. He made sure that everyone got before him. He was there for everybody. He really was a fantastic dad and his kids were his life.”