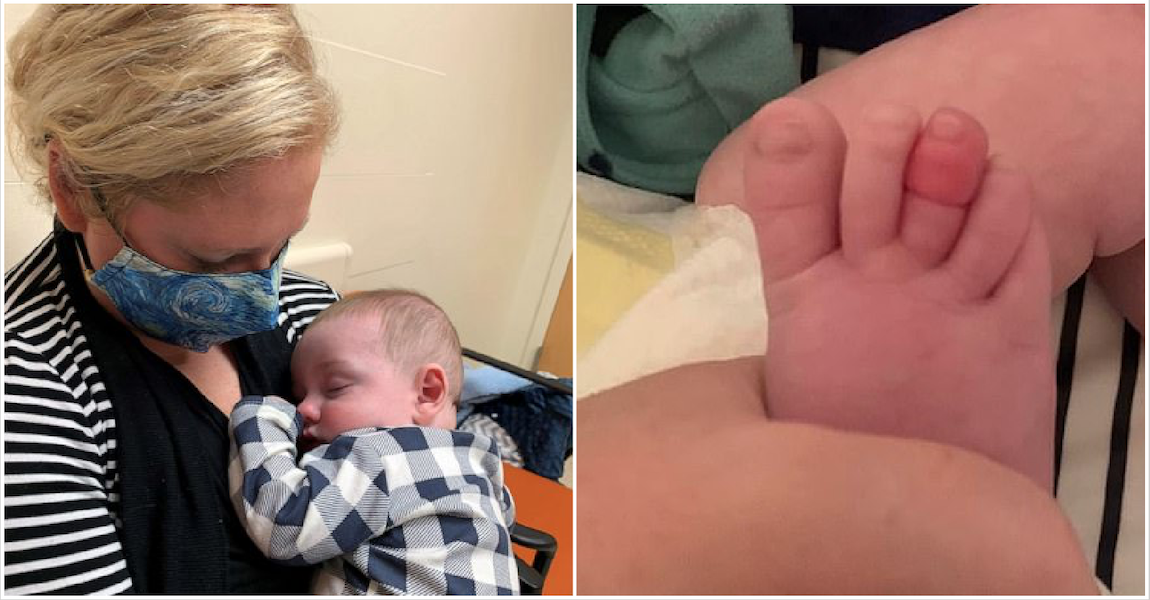 A mother is warning parents about a condition after her infant had to be rushed to the ER. It was a shocking experience for the mom who had to admit her 5-month-old son after a single strand of hair got wrapped around one of his little toes tightly. The strand, in turn, restricted blood flow to his toe. The baby had to be admitted last night to the hospital because circulation was not improving and there was risk of losing his toe. He had a total of 12 Nurse Practitioners, Pediatricians and Surgeons look at it and they tried to find the hair.

The mom from Missouri, Sara Ward, is now sharing how her quick actions thankfully saved her son’s condition from worsening. “These kids are always keeping us on our TOES! This is a warning for all parents of babies and toddlers about Hair Tourniquet Syndrome. I had never heard of it until it happened to my son, Logan.” she reportedly said.

“Hair Tourniquet Syndrome can affect toes or fingers. It usually affects babies and toddlers. Warning signs can include inconsolable crying, redness, soreness, and a line going across the limb,” she continued.

As for Ward, she realized something had gone wrong after noticing “a line going across Logan’s toe and some redness” on Saturday night, January 22.

The mother hoped that it would get better but unfortunately that didn’t happen over the weekend. So Monday, she took her son to see his pediatrician and was eventually consulted to “Urgent Care and the Emergency Room.” She added that her son could have even lost a toe due to it.

“He had to be admitted last night to the hospital because circulation was not improving and there was risk of losing his toe. He had a total of 12 Nurse Practitioners, Pediatricians and Surgeons look at it and they tried to find the hair with tweezers, scalpels, magnifying goggles, and special lights,” she explained.

An OR had been booked as the last resort to slice his toe to remove whatever was restricting the flow. But luckily that didn’t have to go that far. “Many of you might be thinking, it’s just a hair, why is it so difficult to get? I know I thought that.

But the hair strand can wrap so tightly around the limb and then it begins swelling and constricting the area. The skin starts to form over the hair and it gets embedded so deep into the tissues. It makes it impossible to see. Plus add in a screaming, kicking baby and it makes it 10x more difficult,” she explained.

Ward noted that she isn’t aware of how this could have happened, but revealed some speculations. “While we don’t know for sure how this happened, the medical team speculated there was just a random piece of hair in his pajamas that started to get caught on his toe.

Then with all his kicking, it just wraps around the toe and begins restricting blood flow,” she also said, “While Logan’s case was extreme, we were very lucky that we were able to save the toe and narrowly avoid surgery.”

“Check your babies toes and fingers for hairs. If you see one wrapped around them, try to remove it as soon as you can. If you can’t and the redness is worse, see your pediatrician right away. Right now, we are home and will be following up with surgery over the next couple days to make sure it keeps improving,” she wrote concluding her post.