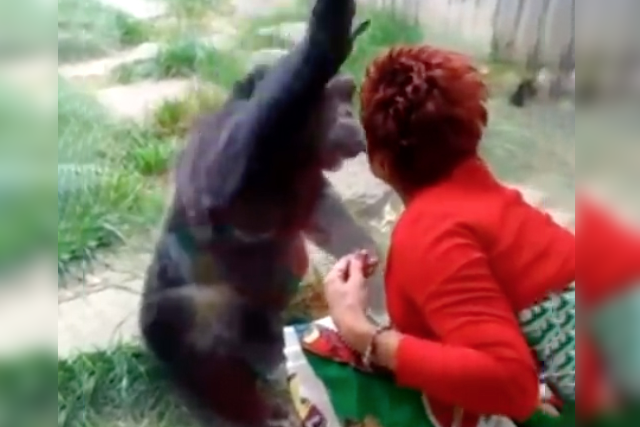 This woman wants to marry someone, who stays within a closed enclosure at a zoo. Her name is Adie and she claims she is in love with a male chimpanzee at the zoo and wants to become the primate’s wife. For about four years, Adie has been visiting the chimp named Chita every single week and calls theirs a real “relationship.”

Despite being separated by a wall of glass, the woman says that she and Chita have bonded like head-over-heels lovers; they would remain on either side of the glass and continue interacting with each other. They would also be seen blowing kisses and waving at each other during Adie’s visits.

The woman firmly believes that Chita loves her back, but zoo officials say that their regular interactions have led to Chita being somewhat ostracized by the other chimps. Because of this, the zoo officials banned Adie from the zoo and refuse to allow her to meet Chita. Adie vehemently opposed the ban and said: “I love that animal and he loves me. I haven’t got anything else. Why do they want to take that away?”

She says it’s completely unfair that the zoo is allowing other visitors to see Chita but not letting her go anywhere near the 38-year-old chimp. “We’re having an affair, I’ll just say,” Adie told ATV. “Other dozens of visitors are allowed to make contact. Then why not me?”

On the other hand, zoo officials defend their decision and explained that Adie and Chita’s interactions have isolated him from the rest of the group. During the day when there are no visitors, Chita spends about 15 hours all by himself because the other chimps don’t include him in the group. “When Chita is constantly surrounded by visitors, the other animals ignore him and don’t consider him part of the group,” the zoo curator said.

“He then sits on his own outside of visiting hours,” she added. “An animal that is too focused on people is less respected by its peers and we want Chita to be a chimpanzee as much as possible.”

Additionally, Chita had a fight with some of the other male chimps at the zoo in 2008 and was seriously injured at the time. Currently, Adie Timmermans believes that she shares something special with Chita, and she hopes to continue their romantic relationship. Although she remains banned from the zoo, officials wonder whether Chita will ever fully integrate with her fellow chimps.

The Tennessee Department of Health says more than 79,000 Tennesseans are currently infected with COVID-19

Mother killed her 14-year-old child with special needs by slamming the hospital table into her abdomen, "She became angry because her daughter cussed at her over color crayons"