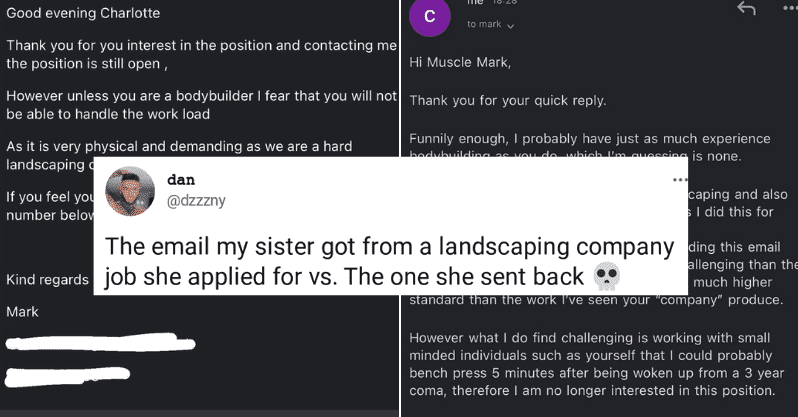 A woman applied to a landscaping job only to receive a very sexist response with respect to her qualifications. Her passive-aggressive response to the company has now gone viral after her brother, Dan, shared the interaction on Twitter. In the tweet, he wrote: “The email my sister got from a landscaping company job she applied for vs. The one she sent back.” He attached screenshots of the email exchange which has since been retweeted more than 117k times and has over 990k likes.

The woman, identified as Charlotte, had sent inquiries about the openings at a land spacing company. A person from the company named Mark got in touch with her. He first thanked Charlotte for her interest in the job and then went on to say: “However unless you are a bodybuilder I fear that you will not be able to handle the workload. As it is very physical and demanding as we are a hard landscaping company.” He added, “If you feel you are up for it, then feel free to contact me on the number below.”

Sexist workplace practices are unfortunately still routine hurdles women are forced to overcome. Charlotte decided to deal with Mark’s sexism in a direct way. From the get-go, she makes her displeasure known. She addresses Mark as “Muscle Mark” and proceeds to thank him for the quick response. “Funnily enough, I probably have just as much experience bodybuilding as you do, which I’m guessing is none,” she wrote. “What I do have is years of experience landscaping and also building training walls in 40-degree heat (104F) as I did this for many years while I lived in Australia.” This should have been the basis of considering her for the job in the first place.

Charlotte clarified that she had applied to the job only after looking into the type of work the company did. She then went on to let Mark know that she was no longer interested in the position. “What I do find challenging is working with small-minded individuals such as yourself that I could probably bench press five minutes after being woken up from a three-year coma,” she wrote and added, “I’m sure you will have no problem finding the correct individual at your next visit to the bodybuilding convention.” She then signed it off as “Charlotte (AKA not the bodybuilder.)”

Dan said, “We originally typed out a more formal response but then we thought to tweak it a bit because his response was so backwards, which was when ‘Muscle Mark’ was added.” They first thought it was a joke but then realized it was very real and this response really annoyed them both.

Dan was all praise for his sister and stated, “Realistically it’s 2021, there’s nothing women can’t do that men can and I think the mindset of men being strong and women being weak needs to fizzle out because I’ve been raised by a woman and can guarantee it is not the case!”

The email my sister got from a landscaping company job she applied for vs. The one she sent back 💀 pic.twitter.com/W9LSjyXrBP