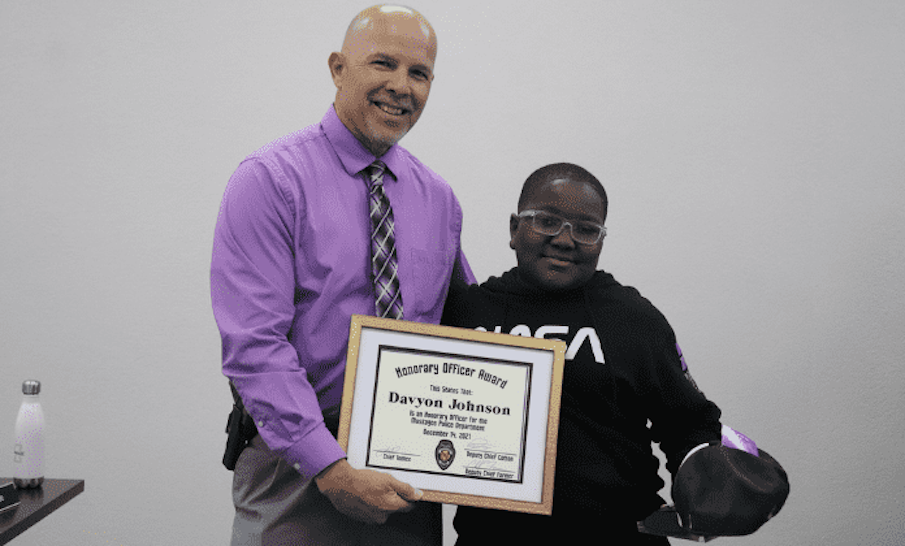 Had the 11-year-old boy not been where he was, two lives might have been lost. The brave boy reportedly saved a classmate who was choking after learning the Heimlich maneuver on YouTube. Later the same day he selflessly ran into a burning home to rescue an elderly woman. His bravery began early on December 9 when a boy ran into his classroom because he was choking.

“The little boy was trying to open a bottle of water with his teeth, and the top got lodged in his throat. He was trying to find help,” recalled his mother Latoya Johnson. “My son, Davyon Johnson, pushed everyone out the way and went and did the Heimlich maneuver.” Later that afternoon, Latoya was driving her son home from wrestling practice when they smelled smoke while they were a few blocks away from their home, according to reports.

When they noticed smoke coming from a house, Latoya honked her horn many times and called 911. In the meantime, Johnson frantically knocked on the front door. When an elderly woman with a walker answered, the little boy escorted her to safety. His courageous efforts have left everyone stunned as he is merely a child.

But his mother was not surprised by her son’s actions as she revealed Johnson has always demonstrated maturity beyond his years. According to her, the 11-year-old boy from Muskogee, Oklahoma was just being his true self.

“He’s always been there to help, whenever he can,” she explained according to reports. “He’s just still the same kid. It’s not like it’s made him anymore or any less.” She also had faith in God. “I believe God is going to protect him, whatever he does in life,” she said.

“Davyon performed the Heimlich maneuver on a classmate on December 9 and that evening helped a woman from her house that was on fire. The Muskogee Police Department and the County Sheriff’s Office presented Johnson with a certificate denoting him as an honorary member of their force,” it continued. Latoya shared that her son was initially very modest about accepting the accolades,, according to reports.

“He didn’t really want recognition. But like I told him, he did something extraordinary,” she noted. So Johnson accepted an honorary certificate that the police department presented him with. His school’s board gave him a heroism award and the sheriff’s department deemed him an honorary deputy. Moreover, December 10 was declared “Davyon Johnson Day” by Mayor Marlon J. Coleman in the city which houses around 38,000 residents.

This week, he is set to receive the keys to his hometown, according to Coleman. “He sends a clear message to the people that this represents the type of people we really are,” he noted.

“He was very heroic. He was very selfless. He did it almost as part of his natural personality. It wasn’t taught. It’s just who he is as a person. For us, it makes us proud that we have those type of young people in our community.”