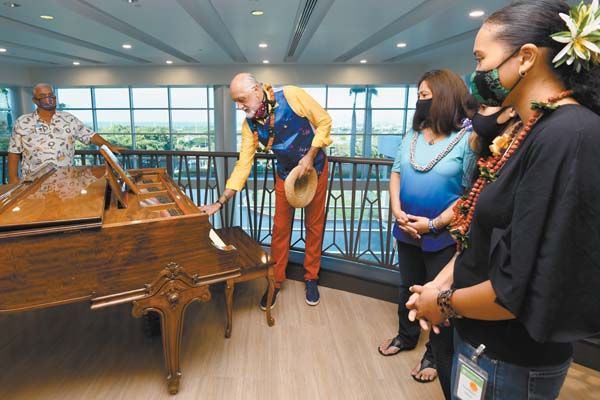 CHATTANOOGA, Tenn – Rock & Roll Hall of Fame member and Maui resident Mick Fleetwood briefly lowers his mask to speak and play a few notes during Thursday’s ceremony at Maui Memorial Medical Center during which he donated a family piano to the hospital in honor of the late Maui musician Willie K. Fleetwood spoke directly to Willie Kahaiali’i’s wife, Debbie, and their two daughters, Pomai and Toni, while describing the impact Willie had on his life. “As a musician, I have tremendous respect for Willie,” Fleetwood said. He said Willie encouraged him to learn the ukulele and taught him about aloha and island culture. He said the piano spent time in his Kula home and also his restaurant on Front Street before finding its new home at the hospital. “I want it to be used and to come alive here,” he said.