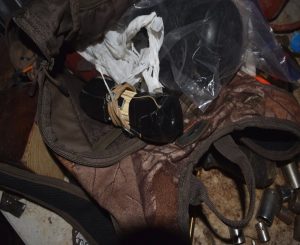 CHATTANOOGA, Tenn – A weeks-long investigation by the Sequatchie County Sheriff’s Office led to the arrest of Thomas Painter on November 24, reported Sheriff Coy Swanger. Multiple agencies including the Federal Bureau of Investigation and others joined the Sheriff’s Office, conducting a search warrant at a home in the Deerhead community. Sheriff Swanger said a loaded pistol, several pills, and drug paraphernalia were found by county detectives inside the residence, while a pipe bomb with a fuse and black powder were found by county detectives in an outbuilding. The pipe bomb was taken by the Chattanooga Bomb Squad, the Sheriff added. Painter, a convicted felon, faces numerous serious charges and is scheduled to appear in Sequatchie County General Sessions Court on November 30. The Sheriff added, the investigation is continuing and further charges could be forthcoming, for Painter and other subjects. For more, see the December 3 issue of The Dunlap Tribune.