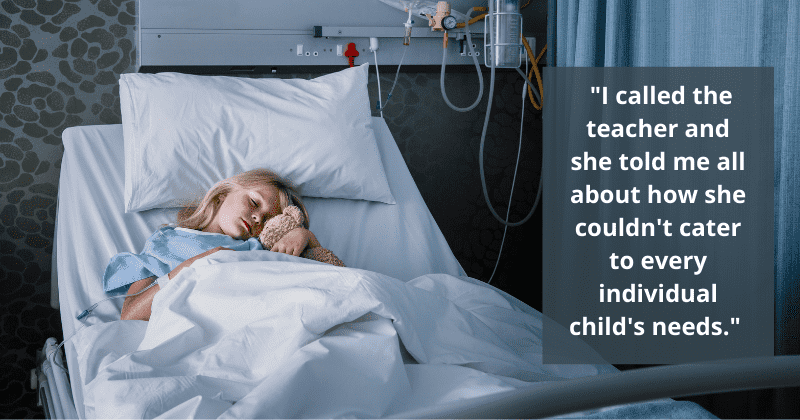 It’s heartbreaking to see young children undergoing major medical procedures, but some people just don’t seem to have any empathy. For an 11-year-child undergoing medical treatment, education, unfortunately, isn’t a priority. The child’s parents had even mentioned to the school that she will be unable to attend classes regularly. The mother of the child took to Reddit to share her story.

She wrote that her daughter “is undergoing a clinical trial for a disorder she has and must go through chemotherapy. We are currently in a different state at a childrens hospital for the trial, we’ve been here for 1 month now and will likely stay for 3 more.” She stressed that it wasn’t a one-off communication with the school, she had mentioned multiple times that her daughter might not be up for regular classes.

“I told the principal and my daughters teacher that she would do work/sign onto the class meets when she felt well enough but school is not our main priority right now. So far she’s not doing great, she’s barely able to get out of bed and is having a really rough time,” she wrote. As a parent, the woman was obviously worried about her daughter’s wellbeing. But, she was in for a shock when she thought of checking her daughter’s grades.

“She hasn’t been doing school and I really wasn’t thinking about it yesterday when I checked my daughters grades and it’s marking her as ‘unexcused absence every single day.” The furious mother called the school who told her there was nothing they could do, and that she had to deal with the teacher directly. “So I called the teacher and she told me all about how she couldn’t cater to every individual Childs needs and lockdown has made her life so hard we shouldn’t expect ‘special treatment.'”

Educators honestly need to have some compassion, don’t they? “I said to her that I do expect special treatment when my child is literally going through chemo! I asked that she please change the absences to excused. She said no and then started telling me about all the missing work my daughter has to keep up on,” the mother said. The teacher simply refused to help out and even said that the child will have to repeat the grade if she fails.

“I got so mad and tried to talk to the counselor and the principal but they said it was up to the teacher and again I got lectured on how hard it is to be a teacher on virtual. So I pulled her from the school and am working on getting her into the local public school.” Somehow, the woman just couldn’t let go of her anger and shared a long post about the incident on Facebook where she mentioned the school. Apparently, each grade has two teachers and the other one is male, so it’s easy to assume who the OP meant.

“Luckily almost everyone agrees with me and a few other people are considering pulling their kids out of her class. I got an email from the principal saying this is harassment and the teacher did nothing wrong and is just going through a hard time. And that I need to cut her some slack,” the mother finished. But everyone sided with the OP and said that going through a hard time due to the pandemic is no excuse to treat a child like this.

A California woman is accused of beating her teen stepson to death, abuse that the boy's father allegedly ignored