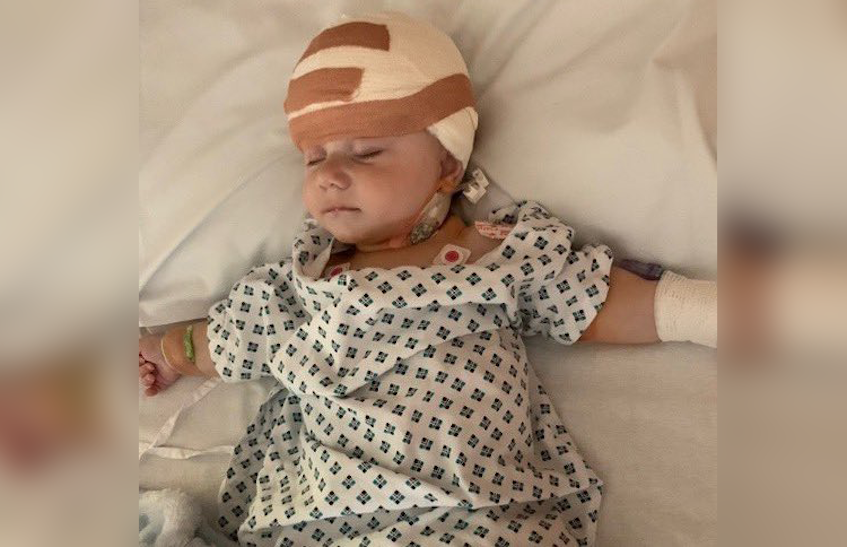 The mother said that her baby son was diagnosed with a potentially life threatening condition and needed surgery to get his head fixed. When the boy was born, the doctors told the mother that he had no soft spot on his head and a protruding lump at the back. The boy was then transferred to a children’s hospital, where a scan revealed that he had sagittal craniosynostosis, a condition which can cause problems with brain and skull growth and can leave the skull in a ‘boat shape’.

The 29-year-old mom, Toni Smith-Pickles, told the ECHO that her son, Jace, needed surgery to fix his ‘boat shaped’ head after being born with a potentially life threatening condition.

The doctors told the mother that her son had sagittal craniosynostosis. According to the health officials, it’s a condition which can cause problems with brain and skull growth and can leave the skull in a boat shape.

Th boy’s family were given the option of having the surgery when baby was 18-weeks-old or 18-months-old.

Jace’s family decided to get the surgery done at just four months old. The boy reportedly went in for a major operation in 2019, the Mirror reports.

During an interview with the ECHO, the mom reportedly said: “Jace’s head had quite a big bump so when he lay on his back he couldn’t lie and look at the sky – we had to buy him a special pillow with a hole in the middle.

We could never put him in his car seat either as his head would just rock onto his chest and he would start to go blue because it blocked his airwaves. Days before the surgery I was so nervous – I made myself sick with worry.

Doctors told me not to read up about the surgery but I was watching YouTube videos about it. We needed to do it though because of the risks of the pressure in Jace’s skull.”

The little boy was operated weeks later where surgeons removed the fused bone in his head. Luckily, after 2 days the family were able to return home with the boy wearing a protective helmet.

The young boy has recovered well from the surgery, according to the Mirror.

Jace is now 3-years-old and has to have a check up every two years so consultants can monitor his progress as the operation can sometimes cause slow speech development.

The 29-year-old mother from UK also said that her son’s recent check up in April went really well and he’s living just like a 3-year-old should.

She told the ECHO: “We still have to be careful if he bangs his head but no more careful than anyone else. Doctors have told us just to treat him like a normal little boy.

He loves going to football club and he’s always running around and climbing on everything. He never stops.”