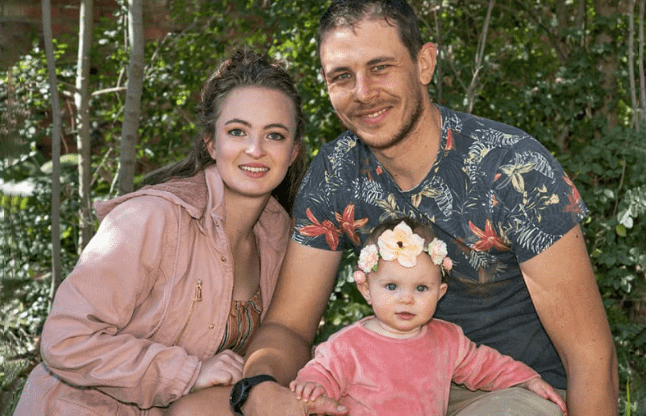 Fifteen months was all that a family could spend doting on baby Isabella before her untimely death. After seeing the little one choke right before their eyes, the family had no choice but to pull the plug on her and let her go. The devastating turn of events for the family began on the ordinary morning of September 13, 2021, where Isabella was going about being her normal bubbly self at home. The baby was making her way around the house whilst munching on a macadamia cookie. At some point, Isabella tripped and began crying, which led to the crushed nuts being inhaled into her lungs as she took a deep breath.

Her alarmed mother began screaming for help and “Isabella’s grandparents came rushing in to see Isabella’s body lifeless and immediately tried to clear her airways and realized that it was too deep in so started doing CPR.

Isabella’s father, Joshua Stark, was contacted and told to rush home from work to get Isabella to hospital. From the time the Isabella choked to being in the emergency room was around 15 minutes where continual CPR was being done to keep Isabella alive.

As Joshua saw his baby girl lying unconscious in a hospital bed, the father decided to shave his head to show his support for her. “Isabella’s father Joshua has shaved his head as they had to shave Isabella’s hair and he wants to show her his support and make sure she isn’t the only one with a shaved head,” said a post put up on the Facebook page called Baby Isabella Stark.

After she was operated on, Isabella’s doctors managed to remove the particles out of her tiny lungs. However, about a week after she choked on the cookie, it became clear that the only thing keeping the baby alive was the machine she was hooked up to.

Doctors decided to call the family to the hospital and tell them the reality of the situation. “The doctors phoned to say the family should come to the hospital,” said, Juliet Basson, the family’s spokesperson. “She was on an artificial life-support machine as her brain did not get enough oxygen.”

It was decided that the life-support machine, which was keeping Isabella alive, would be turned off.

“She died the moment the machine was switched off,” added Basson.

Following the child’s death, Joshua put up a message on Facebook and wrote: “We were blessed to have her for 15 months in our life were she ruled our lives and we loved every moment she has touched so many lives and now she is up in heaven watching over us as an angel and keeping us safe and all we can say is thank you to each and everybody that has been praying or made a contribution we will let know what and how from now we will be coming back to the hospital to get all things in place and settle bills or make payment arrangements.”

Holiday Windows In More Ways Than One