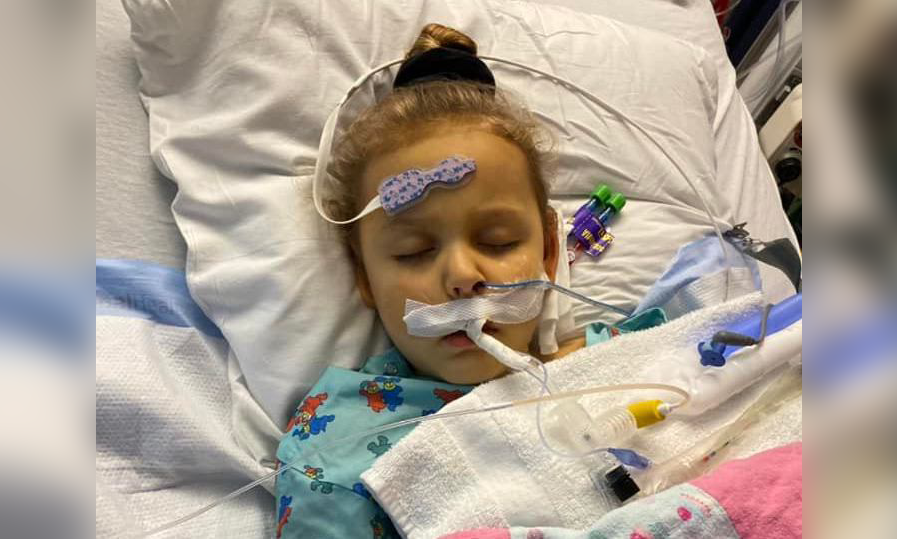 Parents noticed that their young daughter woke up with yellow eyes and they took her to the hospital. Within 36 hours, the 4-year-old child went from being a happy, healthy little girl, to suffering from the effects of acute liver failure. There has been no definitive answer as to what caused the acute liver failure, but doctors suspect that it was due to a virus she had the weekend earlier that caused her immune system to attack her liver. The child spent a total of 30 nights in the hospital and will be at a higher risk of contracting other illnesses for the rest of her life. The girl will also need daily doses of immunosuppressants and medication, the doctors said.

The parents from Ohio, Elizabeth and Jack Widders, told TODAY that their 4-year-old daughter, Liviah, developed a small rash and threw up in December last year. The girl’s parents also said that their child seemed more tired than usual. Just 2 weeks later, the girl’s mother reportedly observed yellowing around her daughter’s eyes. The 4-year-old child told her mother that her pee was orange.

Elizabeth and Jack said that they took Liviah to the hospital right away. The medical personnel told the parents that they were concerned about their daughter’s bloodwork and that she’d need to be admitted to the Children’s Hospital. Tests there showed that she had an enlarged liver and extraordinarily high liver enzymes, signs of inflammation.

The doctors told the parents that they reportedly discovered an inflammation in their daughter’s liver and throughout the day thought she was possibly suffering from acute liver failure or end-stage liver disease. Liviah had tested positive for adenovirus, the doctors said.

One of the girl’s doctors, Dr. Peters, a pediatric transplant hepatologist at the Children’s Hospital, told TODAY that the possible connection between adenovirus and severe pediatric hepatitis is unusual. Dr. Peters believes that Liviah’s hepatitis may be connected to COVID-19, as her bloodwork presented with COVID antibodies.

Dr. Anna Peters reportedly told TODAY: “It’s very possible that COVID, the adenovirus or both triggered an immune response that attacked her liver. But it’s very difficult to prove the cause retroactively.”

The 4-year-old girl was too young to have been vaccinated against COVID-19 and doctors said the vaccination didn’t contribute to the hepatitis. While she was in the hospital, Liviah’s condition worsened. The doctors reportedly gave her multiple rounds of liver dialysis, without which the little child wouldn’t have lasted much longer.

Unfortunately, the little girl began to need a high level of liver care and doctors gave her an expected survival of less than seven days. Luckily, the hospital officials placed her in the highest-priority category of the organ transplant list. The hospital officials also lessened the COVID restrictions so Liviah’s family could visit her two at a time in case she went into a coma or worse.

The girl’s father, Jack Widders, reportedly told TODAY: “In the span of 11 days, she went from a normal, healthy little girl to a transplant recipient.”

On Jan. 1, 2022, the 4-year-old girl was taken into surgery and received her life-saving transplant. After the surgery, the family’s top priority was to get little Liviah healthy again.

The girl’s mother, Elizabeth Widders, told TODAY that she has a message for fellow parents:

“You need to be your child’s best advocate and follow your instincts if something feels amiss. Worse case scenario, you’ll face something like we faced. But it’s much more likely that nothing will be wrong and your child will have just had a little blood drawn.”

Dr. Anna Peters said that Liviah will be at a higher risk of contracting other illnesses for the rest of her life. The child will also need daily doses of immunosuppressants and medication that can be very expensive, and frequent doctors’ visits.

According to the Washington Post, the family says that doctors had no idea what was making their daughter sick. Adenovirus was found in Liviah’s blood but not in her diseased liver, which doctors would have expected if the virus had caused direct injury. The director of the hospital’s Pediatric Liver Care Center, Dr. Jorge Bezerra, reportedly said that it is possible the immune system had cleared the virus from the organ, making it difficult to find.

The little girl also had no sign of COVID-19 antibodies before the operation, but tested positive afterward, which doctors attributed to blood transfusions.

“It is with the happiest of joys that we can tell you that we have just left the hospital with Liviah to head home. In total, we spent 21 nights in the hospital and endured countless ups and downs along this journey. It is through the support of family, friends, neighbors, co-workers, hospital staff, people we’ve never met, thousands and thousands of prayers, and most importantly, the grace of God that we have made it to this point!

We are so thankful and know how truly blessed we are to be bringing our miracle daughter home to recover with her new liver. Our family will be reunited under 1 roof tonight, and really nothing could be more special than that. Liviah is a brave, amazing, strong fighter and persevered despite her failing liver- we knew she could and would.”