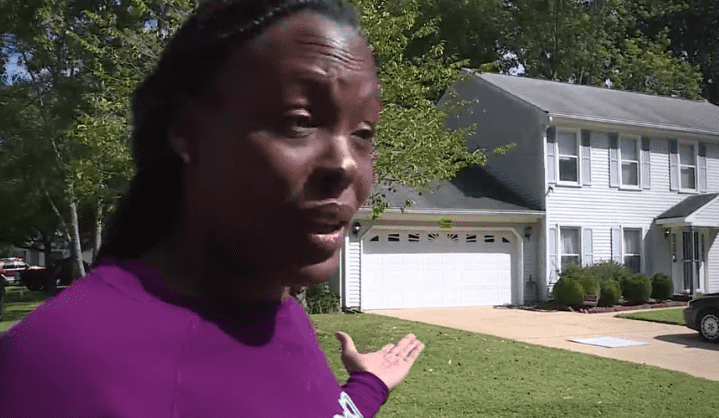 A woman who fought for the country is left feeling like there is nobody to fight for her and her family. The woman moved to the cul-de-sac and genuinely thought her family was moving into her dream home. “The minute we found this home, I loved it,” she said. “It was everything I envisioned for my family and for raising my kids in a nice, quiet neighborhood.”

But if she knew that she would eventually be subjected to racism, she would never have moved to this neighborhood.

“I’m not going to lie, if I had any imagination it would be like this, we would have not bought this house. I would never sign up for this,” the woman, Jannique Martinez, said.

As she spoke about the troublesome neighbor, Jannique said, “We noticed a little erratic behavior like these blinking lights that are on a sensor. When my family or any other family leaves or returns to their homes, they all start to blink. When the sensors are activated, loud music begins to play. He switches the music based on the family that is activating the music.”

To add to the misery, the man has put multiple cameras on his property in Virginia that rob the residents of their privacy.

“We are all on surveillance 24/7 with cameras in every direction of his home,” added Jannique, who has counted eight cameras on his property so far.

On previous occasions, the man would play banjo music loud enough to make Jannique feel like her home was shaking. Jannique decided to get the police involved to do something about the insensitive neighbor, harassing them from the comforts of his home.

Unfortunately, the police told her that they could not place any charges on the neighbor. They responded to nine complaints from the residents; yet, no action has been taken against him.

After people began complaining against the neighbor, matters became all the more worse for Jannique and her family. They now have to hear monkey noises and racial slurs being directed at them from the neighbor’s house.

“Whenever we would step out of our house, the monkey noises would start,” she said. “And it’s so racist and it’s disgusting.”

Even her children are not spared from the blatant harassment. “My son is terrified of him. Terrified, terrified,” Jannique said. “The N-word situation… They came to me and said, ‘Mom, what’s that?’ I didn’t subject my kids to that. I didn’t think they would ever have to learn what this means.”

Seeing no legal action being taken, Jannique added, “I actually felt like… helpless a little bit. Because I’ve gone to the magistrate, I’ve gone to civil court, I’ve talked to a lawyer… I’ve done what I can to do it the right way.”

Authorities said they are “acutely aware of the ongoing situation” but said, “it was determined that the activity, though appalling, is not criminally actionable.”

Disheartened by the authorities’ reaction, Jannique said, “According to the law, it’s just a statement or a phrase or he’s not doing enough or bodily harm or threats to my family. Why does it have to go that far before something that can be done? People shouldn’t have to live like this. I spent 11 years in the military. My husband is also in the military. We fought for this country, but yet there’s no one to fight for us.”