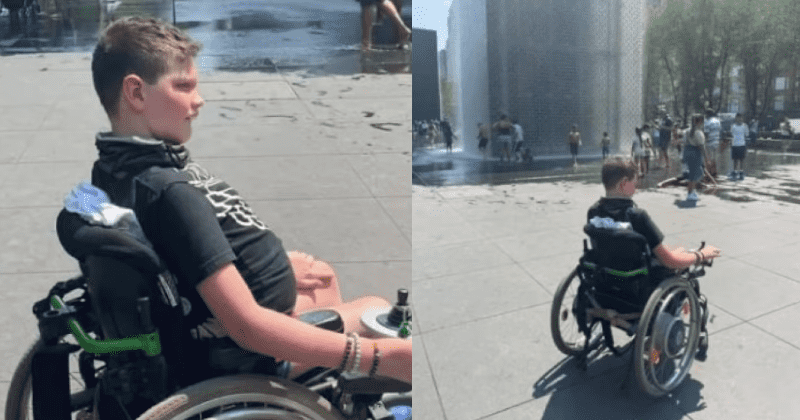 In a heartbreaking case, a young boy with spinal muscular atrophy was instructed to leave a park by a security guard who felt that his wheelchair posed a risk to other children. The 10-year-old boy and his mother had arrived at the Crown Fountain at Millennium Park following a doctor’s appointment last week when they were subjected to the shocking incident.

“He’s had his chair since he was 2 years old and (the guard) said, ‘Well, if another kid runs into him, that could create problems for us,'” she said about the infuriating event.

As for the little boy, Jordan shared that he was “surprised” by the guard’s comments. “Yeah, I said, like, I’ve been here before and have been able to do it,” he shared. The youngster also shared that there are not many things that he can do as he is restricted to his wheelchair. However, visiting the park is just one of few activities he really enjoys, especially on a warm day. “There’s not much else I can do, and that is something I can do – so it’s fun for me,” shared Jordan.

Understandably, Megan too was left heartbroken and furious. “I was like, ‘This is unacceptable!’ You know, you’re able to do this, and it’s perfect for you, and we’re being told, ‘No!'” she said. She wrote a Facebook post on July 6 explaining how her son was not allowed to cool down on a 90-degree day “because him driving a wheelchair isn’t allowed.” She continued, “How about not EXCLUDING DISABLED CHILDREN FROM THINGS, watching your own kids and making sure they don’t run into my child who knows how to drive his chair.”

“Thank you Chicago for making my son cry today…I’m sick of this country fighting for rights for everyone else EXCEPT the disabled community. Chicago, YOU CAN DO BETTER.,” she concluded. As for the 10-year-old, he said that the incident did leave him feeling “excluded.” Despite the guard’s concerns, Jordan entered the fountain and pointed out that in doing so he did not get hurt and neither did anyone else. All he wants now is to make sure that this doesn’t happen to anyone else.

“I don’t want it to happen to anyone else. I want it to be fair for everyone,” he said. What’s more shocking is the fact that Millennial Park’s website says its foundation is wheelchair accessible and that it is designed without edges or deep water areas so that people in wheelchairs can “easily enter the fountain area and participate with full inclusion.” It also states that there are no limitations for where wheelchairs are allowed inside the park.

After speaking to the Titan Security guard, the city of Chicago said that it was an “isolated incident.” The park eventually released a statement expressing how “sorry” they were “hear about Jordan’s experience and have been in touch with the family to apologize.” The statement read, “Millennium Park was designed to be universally accessible, and Access is one of our department’s core values. Working closely with the Mayor’s Office for People with Disabilities, we are committed to ensuring that everyone in our city has equal access to arts and culture – including Crown Fountain.”