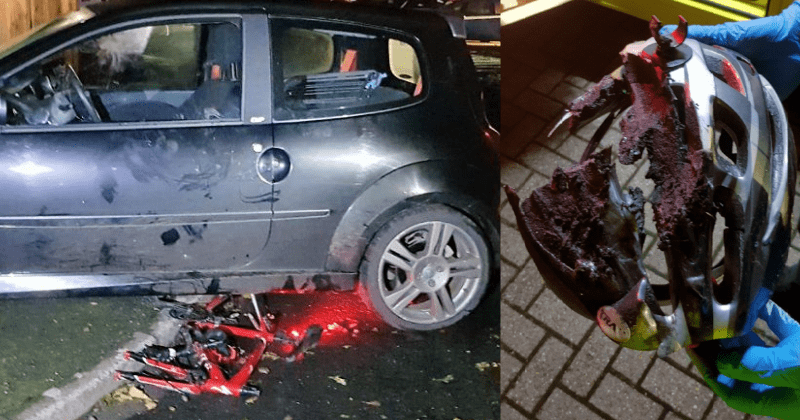 A father watched in horror as a drunk driver ran over his son and then went on to reverse his vehicle over the 10-year-old boy’s body. The drunk driver  was on his way back home from a pub when he rammed into the child with his black Renault Twingo. The boy was reportedly riding his bicycle at the time with his father and another adult. Due to the collision, the boy flipped over his handlebars and was pushed onto the ground before the driver ran over him. The boy’s father as well as others on the road tried to warn Keith about the boy being trapped under the car. However, the drunk man continued to reverse the vehicle over the child and drove off with the bicycle still trapped underneath.

Following the incident, the police found Keith’s car parked on top of a curb with the damaged bicycle still under his car.

The man from West Chiltington, UK, was breathalyzed and soon taken into custody. While the legal drink-drive limit is 35mcg, Keith was found to have had 77mcg of alcohol per 100ml of breath in his system at the time. After the accident, the boy suffered serious injuries but is thankfully recovering. The helmet he was wearing was significantly damaged and covered in blood, but it played a role in lessening the severity of the injuries the boy suffered.

In a statement released by Sussex Police, Senior Investigating officer, Sergeant Richard Hornsey, said: “Vernon was driving home after drinking in a local pub and was over the drink-drive limit when he collided with the cyclist. This was clearly a traumatic incident for those directly involved, but it has also affected the wider community.” “Vernon ignored the pleas of the bystanders, which included the child’s father, and they described the wheels of the car spinning as Vernon tried to drive away while the child and the bicycle were trapped underneath,” the officer went on to say. “The child was wearing a cycle helmet which received significant damage but protected him from a more serious head injury.”

Pointing out the level of “disregard” Keith showed for the safety of others, Sergeant Hornsey added, “Vernon drove for over a quarter of a mile through the village with the bicycle trapped under his car, but at no point did he stop to check if the cyclist was still underneath, which shows a complete disregard for the safety of other road users.”

In connection with the accident that took place on October 6, 2020, Keith was charged with causing serious injury by dangerous driving, drink-driving, and failing to stop after a road traffic collision. Earlier this year, Keith pleaded guilty to the offenses he was accused of. In May 2021, he was sentenced to two-and-a-half years of imprisonment and was disqualified from driving for four-and-a-half years. His early guilty plea played a role in the reduced sentence that he received.