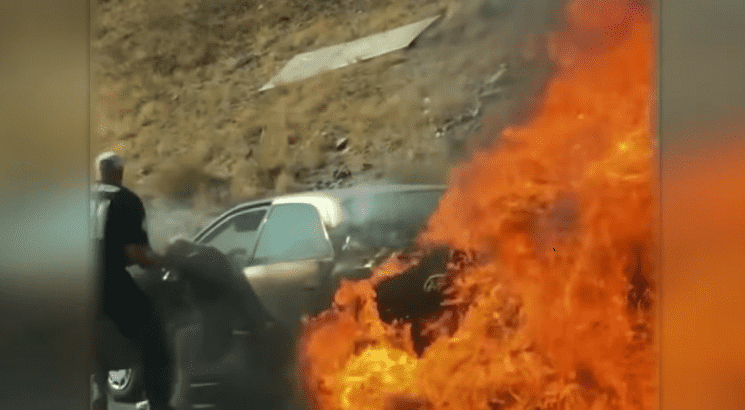 Several cars drove past a vehicle that was up in flames on a highway. But only one car stopped to help the elderly couple that was sitting inside. Inside the car that stopped were five men, all of whom have had troubled pasts and are currently living together in a halfway house. The five men have lived through stories of homelessness, addiction, and incarceration. And now, they are heroes of a story that has made headlines across the country.

While they were on their way to work, the five men saw the burning car in the westbound lanes of Interstate 8 in California.

“I yelled at the guys, I said, ‘We’re stopping, we gotta help them,'” Barry said. “And we all jumped out, and I ran and I saw his wife screaming, so I ran, pulled her out.”

Andre recalled, “He opens the car door, and right then and there, the car explodes. I fall back from the explosion, and Barry just grabs the guy and pulls him out of the car.”

The man that Barry pulled out was 92-year-old Ken Williamson, and with him in the car was his wife, 90-year-old Joan Williamson.

Ken suffered burns during the incident and so did Barry after pulling the elderly man out of the car.

“When I pulled him out, all the skin came off his arm, and I locked onto his wrist,” Barry said. “It was just weird, godly timing. God wanted us to be there, at that spot, at that moment.”

“There’s no doubt about it, five-ten seconds could have made the difference in two lives,” added Jeff.

A passerby, who also stopped to help, couldn’t believe the sight she was seeing and recorded the incident on her phone.

“As we got closer and the smoke cleared, we could see there were people in there,” Marie McCory said. “I just couldn’t even believe what we were seeing. They couldn’t get the seatbelts off, so we could see them struggling to get them off, and we were very worried.”

“It was very inspiring for us to see that,” Marie added about the bravery that the five men displayed.

Although Ken suffered burns, Harry said: “he did not seem like he was in any pain, he was more concerned about his wife.”

Following the dramatic rescue, Ken and Joan are out of danger and are recovering at the UCSD Medical Center.

“Our dad had some burns to his left side, and my mom got out with unbelievably just abrasions,” said the couple’s son, Steve Williamson. “We are just so grateful, these guys are heroes to us and to our parents for stepping up immediately, and that is phenomenal.”

Their other son, Mark Williamson, also acknowledged that the story would have ended very differently if the five men were not present at the right place at the right time.

“Everyone who saw that video knows that if those people did not pull my parents out, we would not be having this discussion right now, so I can’t thank them enough,” Mark said. “I just want them to know that they saved two absolutely beautiful people, and we would love to have information to thank him personally.”