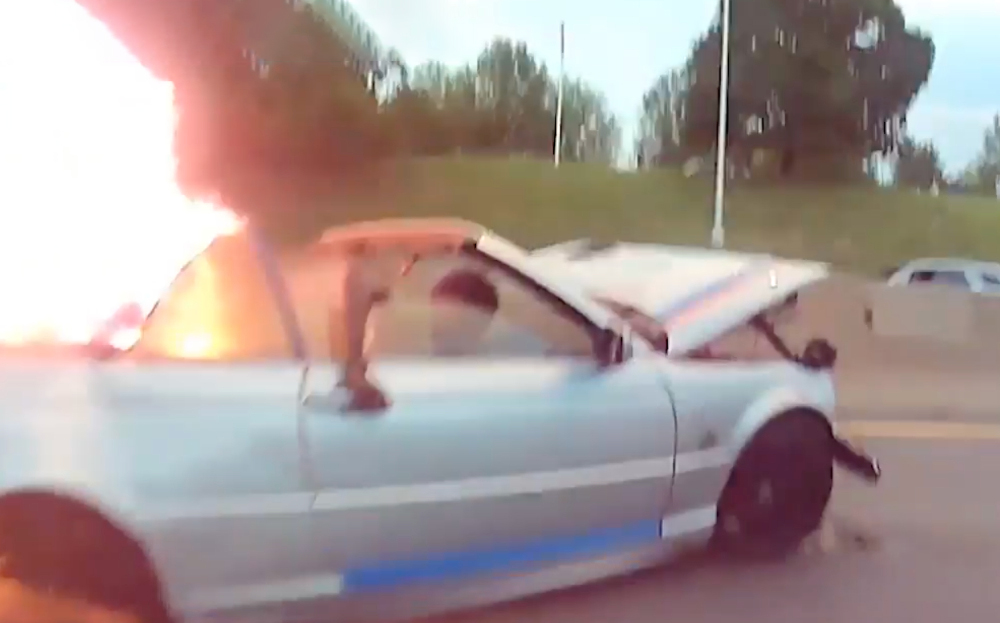 On Friday, a cop turned hero when he pulled a young man to safety after he became trapped in a burning vehicle following a horrific crash. A police officer can be seen in dramatic video pulling a man from a fiery vehicle on the highway, saving his life after a rollover crash caused the car to burst into flames.

Dash cam video captured as another officer pulls up to the scene shows Pauley dragging the 23-year-old victim from his vehicle to safety on the side of the interstate in Michigan.

“As soon as I got out of my squad car, there was bunch of bystanders yelling at me that somebody was trapped, so my training just kicked in,” Pauley, 30, said later. “Somehow he made it into the passenger seat of the vehicle – I don’t know if it was from the impact.

“It looked like he was trying to get himself out of the vehicle, but he was unsuccessful at doing so,” the officer continued, describing how he found the driver as he was going in and out of consciousness. “I reached my hand in because the outside door handle was locked, and I was able to unlock the door, and he pretty much just fell into my arms and that’s when I pulled him to safety.”

Not long after, fellow officer Daniel McCaw arrived to assist Pauley, and quickly asked for an ambulance.

The driver was conscious as he was taken to a local hospital. An investigation into the crash is being conducted by Michigan State Police.

“All I could think of was – perfect timing, glad we got here,” Pauley said. “I don’t think he would have made it. Timing was perfect. Somebody was looking out for him.”

Bill Cosby walks out of prison free as court overturns rape conviction: "There are many liars out there"